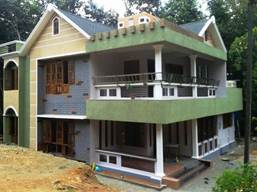 Ferrocement Society of India having headquarter in Pune has announced results of the third best ferrocement structure competition. This is All India Level competition and the structures built using the ferrocement technology are eligible to enter.

This year Prakash Nagnath for using ferrocement in building elevations, Arch Anupama Kundoo and her associate Alba Balmaseda from Madrid who built portable box type ferrocement houses and Ms Biji John, Ferrotechnologies, Changanacherry, Kerala for building a 2 story house in Pathanamthitta, Kerala had submitted their entries. The result is recently declared and Ms Biji John from Changanacherry, Kerala has succeded in grabbing the award. The award is named after the veteran Late Vishnu Joshi, Strctural Enginerer and pioneer in ferrocement technology. After his demise in 2011 the competition of such structures is being conducted by Ferrocement Society, an NGO working to promote this technology.

The society has conducted 27 workshops for students in Engineering and Architecture colleges in India. This technology is different from RCC and is very useful to build earthquake proof houses. Government of Maharashtra has started working on a Building manual from the engineers of Maharashtra Engineering Research Institute, Nashik, where MERI has already done experiments on Boat Building, Canal Lining, water tanks etc