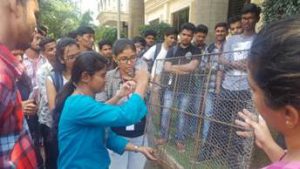 MIT Academy of Engineering, Alandi and Ferrocement Society, India jointly organized this one day workshop on 28th September 2018. Prof Sumit Patil was the co ordinator of this event. Students are searching for new technologies which will be helpful after graduation. The intention of this workshop was to expose the students to the new technologies which can help them to become successful entrepreneurs. 45 third year and last year students participated with 2 faculty members of their college. The workshop was inaugurated by the guest faculties and Prof. Sumit patil by Saraswati Pujan and the regular Prarthana.

Er Chandramohan, President of Ferrocement Society explained the use of Ferrocement in the world and the difference between RCC and ferrocement. So many beautiful structures like Nautilus house, Mexico, the Mojo Century Centre Texas, dome houses in Chile, Indonesia, Sri Lanka are built using Ferrocement. But he said India is much ahead. In India also full buildings are built with ferrocement like a Jadhav Farm house in Satara, Bhalerao Banglow near Pune. Hundreds of various constructions are available where Ferrocement is used in India, like big size pipes, Silos, Fan duct cylinders, Big water tanks and retaining walls. He said ferrocement is a friend of any architect. Er Chandramohan also explained how innovative structures are built using Ferrocement. He explained cases where RCC contractors failed Ferrocement could be done easily. A nalla was diverted in Pune by constructing in situ Ferrocement pipe of 700 feet length and 15 feet diameter. Many such structures were explained by him. He said Pune based Dr Divekar has developed “All in One method” of building construction. The workshop was concluded with question answer session and very fruitful discussions with the experts. 4 students expressed their views about the workshop during feedback session. Prof Pawar gave vote of thanks to the guests. Sakshi Wayal and Vinay Jadhav were the anchors of the workshop.